“The talent was definitely dropped into the cradle with me, I think. At school in Tarutino when I was only 7 years old, we had to sew a doll’s dress completely by hand as a project for our home economics class and mine was made out of beautiful black brocade.The dress had a flared skirt, cut on sleeves, an ivory collar, and tiny gold buttons down the front. It turned out quite well and as a result it was entered into a District city exhibition in Ackermann winning first prize.

So, I would say in my recollection, this was the first step towards my future profession.” 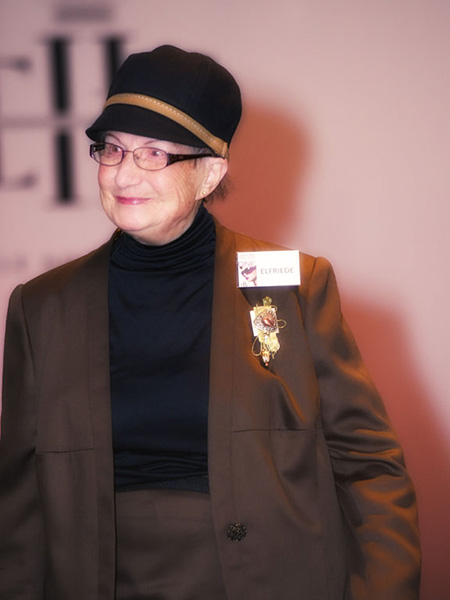 Elfriedé Holtkamp, a highly accomplished couturiere in Calgary, Canada, was born in l925 in Tarutino, a small village in Rumania. She grew up there with three younger sisters and her parents until 1940, when the whole family was abruptly uprooted during the Second World War abandoning their home, resettling in a small hamlet near the city of Strasburg West Prussia.

“At 15, I had graduated from high school and was ready to choose my life’s course and so I chose to apprentice with a Master Seamstress living in Strasburg, who was originally from my hometown also. Although, my days started very early commuting by train with long hours of work, I was so absorbed and enjoyed every minute of it that by then I was convinced I had chosen the right career path.

As it transpired, we had to again evacuate our newly established home in January of 1945 and became refugees once more moving west by horse drawn wagon which took four long months in the cold of winter. By May we were taken in and given a place to stay by kindly people of Vollersode, a village of Bremen in southern Germany. But by then we had nothing left, but a few personal belongings.

When finished with my career training, I began my first professional sewing business with our family sewing machine that had surprisingly survived the precarious journeys. The business became very successful even during the severe shortages of the time - and sometimes my clients would pay me with food. New materials were practically non-existent, but one can become extremely creative reusing the materials from good quality garments. After four years the circumstances of my young life changed and I moved on to work in Weissenburg, Bavaria.

Again, my sewing skills and expertise attracted reliable clientele and a productive business in Weissenburg until 1954 when I married my husband when we both decided to take up the opportunity and immigrated to Canada. Calgary is the place where, for the third time, I developed my professional sewing business from the ground up. I must say, I’ve really enjoyed my success here and am glad to finally have had the chance to, after being forced to leave my home twice before, put down deep roots.”

Elfriedé in her design and sewing studio

“My clients became aware of me by ‘word of mouth’ through various aspects of my work, as I had never formally advertised have always worked out of my large home-studio. Through the late 1950’s to mid 1960’s, each spring I was commissioned to create finely tailored Western suits of wool and brocade outfitting the Calgary Stampede Queen and her Ladies in Waiting with two tailored western suits each for the formal Calgary Stampede engagements, outfits for the honoured guests of the Calgary Stampede including the wife of the honourable Governor General of Canada Roland Michener, as well as for other dignitaries during the festivities.

Among business wear, daywear and evening wear other aspects of my work has been in creating couture level costumes for masquerade balls in Europe and costuming for local theatre productions such as the ‘Cole Porter Review’ in the mid 1980’s. Today my clientele has broadened across Canada the US, as well as overseas requiring all types of evening, day and sportswear, and special occasion garments.

Thoughts of establishing a teaching studio began in 1992 after I had an unfortunate tumble which resulted in a broken wrist that rendered me unable to work for several months. The serious question arose in my mind as to what would I do if I could no longer sew. A dear friend encouraged me to teach.

This decision started me along another life journey - which took many years to develop. Everything that I had learned and experienced, the methods and techniques developed over the many years as a professional couturier, has been documented and organized into a comprehensive curriculum to instruct individuals in the business of couture - which includes ladies tailoring.

From teaching students sewing basics - such as the correct techniques of hand sewing - to understanding materials, styling and designing, custom pattern making, structuring and fitting garments properly, creating clean professionally detailed and finished garments to fulfill the desire in many talented individuals willing and eager to master the art of couture and design, so that they can pursue their dreams of a career in couture design. And, fortunately my injury eventually healed and I do indeed still design and sew!”

Elfriedé has prepared a pragmatic method of instruction and training to cultivate knowledge and required skills to become well rounded and proficient in sewing and ultimately, providing mentorship to master the artistry of haute couture.

Students are initially tutored in a two year program to learn and practice the foundation skills necessary to become methodical and competent in hand sewing, needlework, custom pattern making, structuring, and fitting; promoting dexterity and efficiency in the use of the tools of the trade. A further two years of instruction and mentorship is prepared for competent students who have mastered these fundamental skills, adding tuition in business essentials skills, expanding their knowledge and skill set required to become masters in all areas of haute couture.

The school is named ÉCOLE HOLT COUTURE, ‘Holt’ being wordplay on ‘Haute’ derived from the founder’s name. It officially opened its doors in September of 2007 to students for the fall 2008 Term.

Elfriedé is keenly interested in passing on her wealth of knowledge and experience to future generations of artisans who have the desire to learn the skills and knowledge to work at a level of excellence in the ‘haute’ couture sewing and tailoring industry.